This week 9SD have written poetry inspired by poems by William Blake. They have taken the most interesting words from these poems and turned them into characters. Here are just two of many excellent examples:

Inspired by A Poison Tree by William Blake

The word as a resident of my hometown.

Foe is the hustler who never gets trusted by anyone

because he always betrays everyone.

a sunny day go rainy and stormy in two seconds.

Garden is the school girl that always smells like flowers and

looks very pretty. I kind of have a crush on her.

outside, but never wins the argument.

Night is the guy who gets tired of Day and Wrath fighting so he just does his own thing.

I sometimes go and hang out with him. He’s very chill.

Grow is the wolf who never stops growing

and is one of the sons of Loki the God of Mischief.

Soon his whole foot will be the same size of the village.

Bright is the young boy who shines everyday

no matter how bad the weather is because his mood is never negative.

Apples is the guy who is nice to everyone and everyone is nice back.

Except for the doctor who always disappears when someone takes a bite.

Sunned is the beach lifeguard who is the leader for Baywatch and has a record for most people saved.

Fears is the momma’s boy who lies to his family about playing football to “carry on” the family legacy. But really, he’s too scared to play.

Bore is the pregnant lady who is on her way to have another baby.

Soft is the chubby kid who eats a lot and feels like a pillow when you lean on him.

Inspired by A Poison Tree by William Blake

The word as a resident of my hometown.

Day and Night are a couple who arent allowed too see each other.

Foe is a girl who puts family over everything.

Apple is a little boy who sits up in his tree singing all day long.

Fears is a little girl who is afraid of the dark and needs a nightlight.

Morning is a little dog that wakes everyone up. barking away at 6am every day.

Garden is an old lady who loves to plant flowers and trees.

Angry is a man who always yells a people when they didn’t do anything.

Tree is the girl who never stops growing. she decided to dye her curly hair green.

Soft is a young girl that takes everything to heart.

Watered is a netball player who never stop drinking water.

Smiles is a boy who is always happy even when something’s not right.

Shine is a little girl who loves to grant people wishes, like a genine.

Deceitful is a young boy who always lies to his mum and dad when he comes home late.

Sunned is the girl who always tries to look pertty for the boys at the beach.

Beneath is an old man who is always looking for gold with his metal detector.

This term 9GR read and studied the novel Bastion Point, about the 507-day land occupation in central Auckland in the 1970s. They produced excellent paragraphs about aspects of this novel in their mid-year exams, and finished the novel study by creating their own protest posters. The class were asked to decide which whenua (land) they felt most connected to, and imagine that it was possibly being taken from them. Here is a selection of some of the protest posters that were created in response to this. 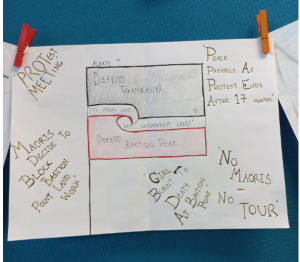 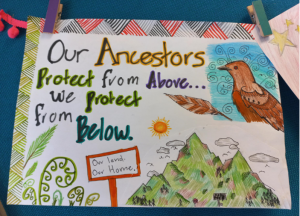 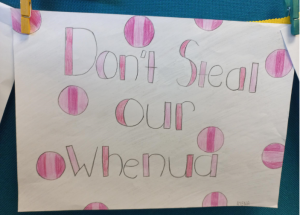 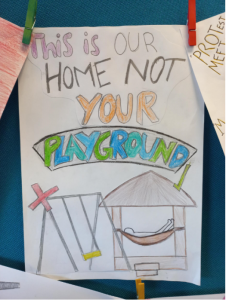