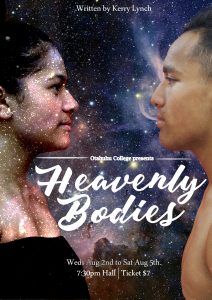 Tickets are now available for the Otahuhu College Production Heavenly Bodies. Tickets cost $7.00 per person and can be purchased from Student Services

‘Heavenly Bodies’ is a modern love story that alludes to both Greek and Elizabethan theatre. 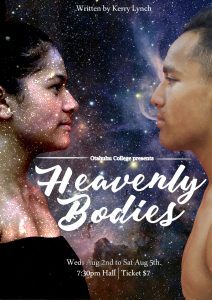 At the start of the play the three Fates realise that they have forgotten how to have fun. This is due to them becoming slaves to their work as they are now responsible for a human population of billions! In an attempt to reawaken their playfulness, they decide to make mischief like they did in the ancient times.

With the assistance of the dice the Fates select two teenagers who live in New Zealand. The dice also determines that one of these teenagers will experience unrequited love. The ensuing story follows Hugo James, a Kiwi boy who falls in love with an Italian girl named Verona di Lorento. To win Verona’s heart Hugo must overcome the impossible obstacles that these ‘super natural sisters’ place in front of him.

The play is a comical and thought provoking commentary on love and what it means to be human. The play also features classic New Zealand loves songs that are performed by the Fates.

Our season runs from this Wednesday to Saturday night at 7:30pm.