On Friday, the 4th of June, some year 11’s from our Music Department were fortunate enough to receive an opportunity to watch the Maui Matinee Show. Different schools from around Auckland were able to attend hoping that our young minds can understand and relate to their dance performances. Knowing that the younger generation are who we depend on for the future, they hoped that what they would showcase would be a story that would be told / carried through many generations to come.

They showcased different styles of music and dance, each performed with emotions that would let the audience know how they feel and how Maui feels. One word that would describe the entire show would be “Powerful”. Everything from the smallest performances to the entire group was powerful. Powerful in the actions they used to tell the story, powerful in the songs they sang and played just to set the scene, powerful in the words they used when expressing themselves and how they viewed a certain situation that still occurs today; but powerful enough that it motivated us to keep our culture alive. The fact that people who came from all across the world can change our traditions is strong. With that opportunity they seem to take advantage of us and our culture.

Each student who attended can say that it was awesome and inspirational. We were able to engage with the music, the dancers but mainly the story behind it. The influence that we get nowadays become a reason as to why our culture is dying, our stories have been faded; our ancestors’ sacrifices have been forgotten. This show was definitely worth watching. 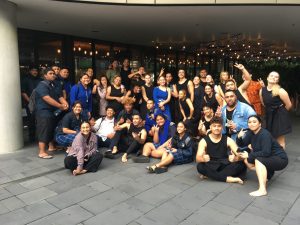